October 02, 2011
This morning we met Aunt Yoy and Cousin Yoy at Goldberg's for some chow before hitting up the park for a nice walk.

As usual, Goldberg's was crowded and they sat a large party at the table next to us.  It was close quarters.

Out came our food.  Aunt Yoy and I spent the next five minutes getting everyone situated before we were able to eat.

Finally.  My breakfast.  Come to mama!

I'm shoveling my food in, as usual, and I look up to a shocking scene.

The waitress was standing with her backside to Little E while she was taking the order for the table next to us. Like I said, it was close quarters.

It was close enough that Little E was able to reach out with his T-Rex arms and firmly plant his hand on this woman's booty.  He was totally digging in and copping a feel.

I shouted at him and he jumped.  He removed his hand immediately.  The waitress laughed.  The entire table next to us laughed.  I apologized profusely for my perverted baby.

But it didn't end there.  Little E is a sensitive soul.  He does not like when I raise my voice, especially when it is directed at him.

First came the pout.  Oh no, I knew where this was heading.

But it was too late.  Mt. Little E erupted.  Crying and screaming with a mouth full of half-eaten food.  See The Mrs. Yoy Diet Plan.

The mother at the table next to us turned around as Little E was basically screaming in her ear.  She asked me if Little E was ok given the sheer volume of food in his gaping mouth.

Not to be overshadowed, Big E started fake crying as well.

For real?  Can we not go anywhere without being a total freak show?  I guess not.

We packed up the Yoys and hurried out of there.  But not before I saw the waitress give her digits to Little E. 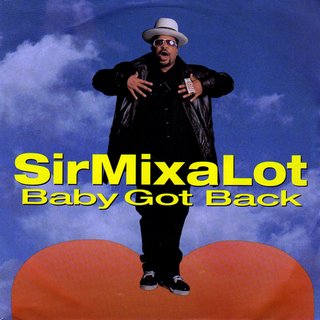